Paris in the spring

It was not only my first trip abroad but also my first flight; not that I spent much time in the air. I had booked through the National Union of Students’ travel agency which sold me a return ticket for the unlikely sum of about five pounds. It meant a coach trip from Victoria almost to the south coast where the terminal was a wooden hut on a former RAF base. I did not expect a large airliner but, even so, I was relieved when it wasn’t a biplane. I was a slightly nervous passenger but the flight lasted only fifteen minutes, barely time to start hyperventilating.

We landed at Beauvais airport which is over 60 miles from Paris. By the time we reached the outskirts, about half of my ‘flight’ had been at ground level. We did not even reach the centre of Paris; the coach stopped at Porte de Clignacourt, the northern end of the Metro line. I went off to buy a ‘carnet’ which I was informed was the best way to buy a ticket for the Paris Underground without having to use too much French.

In the six months that I had been in London, I had learned to use the Underground to navigate that metropolis. I would do the same here in Paris using le Metro; ligne no. 4 became my geographical centre of gravity for the five days or so that I would be in Paris. 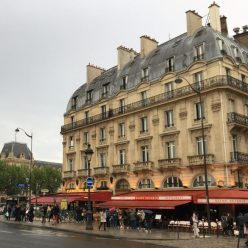 I would come up out of the Metro here. Behind the grand building, to the left, is the Seine and a view of Notre Dame. Just to the right is the less grand Rue de la Huchette where I stayed.

I had nowhere to stay but decided to head for the university area where I might find a fellow student to let me sleep on the floor. Ligne 4 took me directly to Saint-Michel, the nearest stop to the Sorbonne. I had inadvertently chosen the Left Bank, Quartier Latin, le Boul’ Mich’; it was fortuitous.

The students I saw in the Place Saint-Michel were too well-dressed and middle class to be approachable by this scruffy Englishman with poor French. Wandering down a side street, I found a grubby hotel which offered a cheap room and hot water for two hours a day. I paid the old woman who sat in her concierge’s booth giving me incomprehensible instructions while I tried to look attentive.

There was a jazz club under my hotel named after the Rue du Chat qui Pêche. I only went once, unsure of my credentials as an intellectual.

I was now lodged in the Rue de la Huchette, in the centre of bohemian Paris. A good choice for an erstwhile beatnik and aspiring intellectual. I had found my way here on my own, I had somewhere to sleep, and I was not confused by public transport. I felt surprisingly at ease on my first day as a foreigner.

My next prime necessity was something to eat. Again, the university failed to provide anything even for its own students in terms of catering so I wandered off down the Boulevard Saint-Michel where, to my great satisfaction, I found a cafeteria called ‘La Source’. Restaurants, with their maitres d’hôte, menus in French and prices in francs, were impossible to negotiate so to be able to see what I was buying, with prices I could quickly calculate, put me in control.

To a young man used to a diet comprising what was available in the Bull Ring in the 1950s, cafeteria food in Paris was a revelation. I am not even talking about exotic unknown foods cooked with unusual ingredients. I had never before had raw grated carrot with olive oil; or boiled eggs in jelly; or meat patties in breadcrumbs; or salads with a garlic dressing; or warm crusty baguettes. You could even have a small carafe of red wine with no fuss whatsoever. With an individual fresh strawberry tart.

Next to my hotel there was a narrow alleyway called Rue du Chat qui Pêche which opened onto the left bank quai opposite Notre Dame cathedral. Passing the bookstalls, this became the first steps of my perambulations through Paris. In the few days I had to explore, I rarely used my carnet except as a quick route to Les Halles and the flea market at Porte de Clignacourt. At that time these were lively working markets which I preferred to the more formal boulevards cut through the city by Haussmann.

I visited the great monuments and parks by foot, somewhat surprised by the compact size of Paris. I bestrode the city from the Luxembourg Gardens to the Etoile, Invalides, Eiffel Tower, taking artistic inspiration on the way from the Louvre and the Impressionists housed at that time in a small gallery called L’Orangerie. There were plenty of places I did not see but I had already decided that this was a place I could enjoy and would return to.

The reason I was in Paris was a young woman. Her name was Lyn; I had walked her home one night from Selly Oak Youth Club but, unlike other girls, she had let me repeat this gallantry. She lived on the other side of the Bristol Road which meant a half-hour return walk for me; after a few weeks these solitary homeward promenades allowed me to revel in the fantasies of a young man who, if pushed, might admit to being in love. 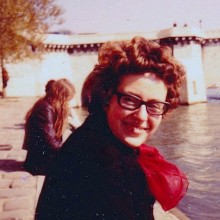 We were at different schools when we met, both studying for ‘A’ levels. She was serious-minded, intelligent, and knew many things that I didn’t. She was in her final school year when I went to London and we could meet only occasionally. When she announced that she would be going on a school trip to Paris, it seemed obvious that I should try to follow her. Although she would be shepherded, cloistered and secured from any actual experience of Paris or French people with the rest of her class, I thought it suitably romantic if I could whisk her away from her custodians even for a short time.

She and her class were taken to a high walled school which was not even in Paris but in Sceaux, to the south. Crammed into dormitories at night, fed from communal marmites in a refectory and subjected to classes and tests every day, her visit seemed to be more about sequestration than education. She had a highly regulated programme; there was insufficient information for me to intercept her. Somehow, she managed to escape for a few hours one afternoon; our assignation felt surreptitious and we went to the cinema as if to hide from public gaze.

We watched ‘Le Samouraȉ’ starring Alain Delon; he acted the silent type and there were long periods of no dialogue, fortunately for my lack of French comprehension. A walk from the Arc de Triomphe to Les Tuileries and along the Seine in sunshine took us back to Rue de la Huchette. The concierge grumbled as we entered my hotel. We had only a short time alone together. The train back to Sceaux stopped at Saint-Michel, just yards away at the end of the rue, and I reluctantly took her back to incarceration. I did not see her again until we were both back in England.

It was quintessentially romantic; two young lovers meeting up in Paris, snatching a few hours together. But like all interesting love stories, there was a shadow. This brief encounter was a prelude to many other rendez-vous over the next year or so, lasting at most a few days. In England, as in Paris, we would have separate lives, but in different cities. Marriage was a rejected bourgeois notion; I expressed a wish that we should live together but I could offer no means to do so. Perhaps we should have just run away; at least we would have been together. 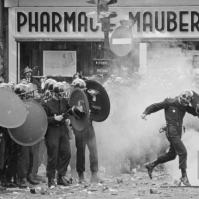 Back in England, barely a fortnight later Paris was in the news. On 6 May, a demonstration against the police occupation of the Sorbonne was broken up by riot police. I watched on television as tear-gas exploded outside the Café Saint-Severin where I used to take coffee. I was still a long way from political awareness but I could not ignore the flickering flames of revolt now evident so close at hand. There were barricades in the street I had recently walked and the cobble stones were being ripped up to be hurled at the police.

I have no idea where my interest in France came from as a teenager. I was good at French, passing my ‘O’ level with a grade three; not bad for someone whose main subjects were scientific. French was not considered a suitable subject for a boy; including and especially by my fellow pupils. I recall my class destroying a new French assistant within three weeks with a concerted barracking. He soon left dejectedly but we were not punished for our bullying.

As a paper delivery boy at the local newsagent, it was my job to deal with the special orders for magazines. In Raddlebarn there was one person who read the Times Literary Supplement, one other who ordered the Scientific American, and one who read Vogue; all delivered to the posher houses on the way to the university. A couple of people would get magazines in Polish and someone else had an order for Paris Match. 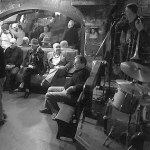 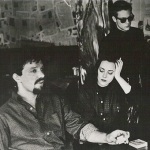 How I imagined French intellectual life when I was a teenager

I ordered an extra copy for me. It probably helped my French but I never came to understood the complexities of French politics; at the time there was some impenetrable scandal over Algeria. I affected a ‘French’ look with a black polo neck sweater and Gauloises to give flavour; I even had a beret. Being the only ‘beatnik’ in Selly Oak meant that I had no-one to talk to so I became the proverbial outsider and thus an existentialist, as far as I understood what that might mean.

When I reached London, France would be part of my new intellectual world; I read Verlaine, Rimbaud and Baudelaire. I discovered Zola, Camus and Sartre; I went to the French Institute in Kensington to see plays by Jean Anouilh and films by Jean Cocteau. Jean-Luc Godard became a favourite film-maker.

My girlfriend was to join a school trip to Paris in spring 1968. Although there was little chance that we would be able to meet in Paris, I decided to follow her on my first trip outside England. I would spend £5 for the return trip from London to Paris on a student discount ticket.