At the age of 18, I was not much aware of class differences. My family didn’t have much money but no-one in Selly Oak was well off in the 1950s. We local children all went to the same primary school. Perhaps we were too young to notice the very slight differences. At Raddlebarn Primary School I did well at the intelligence tests and was top of the class. I did not feel inferior at all.

Nor did I feel inferior at King Edward VI Camp Hill School which was otherwise utterly middle class. I could reassure myself that I had been awarded my school place on merit. I was not bullied at school; I only remember having one fight with another boy at Camp Hill.  I had more cash in my pockets than my middle class friends who depended on pocket money from their parents. I could afford to buy cigarettes whereas they had to steal them from family members. I was able to buy myself more fashionable clothes than they were given. My winkle-pickers with grey spats and pearl buttons gave me status.

As I grew up, I was given responsibilities which seemed to confirm that I was not inferior; head boy at primary school, Sunday school teacher, troop leader in the Boy Scouts, key holder for the local youth club. I did not just deliver newspapers on my paper round, I marked them up as well. In Selly Oak, even at the age of 15, I was a born leader. 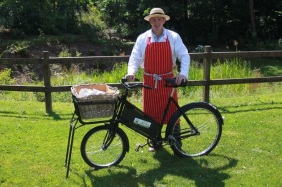 A butcher’s bike, similar to the one I had to use. At 13 years old I was four feet six inches tall and the bike seemed enormous. The brown baskets on these would not be tolerated; my first job after deliveries was to scrub them with bleach and make them ultra clean and white.

However, I learned about nepotism. I would never be head butcher’s boy because there were two of us and the other boy was Mr Parkes’ nephew; he got the new bike with decent brakes while I got the worn out pre-war death trap. At church I could never be head choirboy; that was reserved for the vicar’s own son.

I felt as if we were all in the same boat in Selly Oak, even the MP[1] who lived on our street and the shopkeepers on Raddlebarn Road. They were the nearest we had to a middle class. I had to pedal my butcher’s bike to some better-off houses in Selly Park or Lady So-and-So’s at Garth House[2] in Edgbaston but I never saw her.

At home, we never discussed politics. My father took the notion that a ballot should be secret and extended it to refusing to discuss how he would vote even with his own family. I suspected that he voted Conservative, not because of any ideological issues but through a sense of respect and obligation. He read the Daily Express. My mother probably had similar opinions. She worked as a cleaner for a Conservative councillor to whom she was loyal for many years.  Later he introduced my mother to Margaret Thatcher, a meeting my mother was extremely proud of.

In the early sixties, there was not very much difference between the two main political parties. In general, they all agreed that the NHS should be supported, that council homes should be built, that the welfare state was a Good Idea. There might be foreign policy differences, and there was a polarised discussion about joining the Common Market. But everyone was very polite, except in Smethwick.[3] There was no name-calling; even words like ‘left’ or ‘right’ were used very carefully.

In Selly Oak, the elected MPs were alternatively Conservative or Labour between 1955 and 1992.[4] When I grew up we had a Conservative MP. I couldn’t vote until I was 21 but I showed my rebellious nature by declaring for Labour. The truth was that I could hardly tell the difference.

By the age of 18 I perceived my place in society with a late-Victorian sense of duty and self-help. Perhaps I had learned about Samuel Smiles[5] in one of the encyclopedias that Dad had bought through a Daily express book club and which I read avidly. Smiles’ notion of self-help, tempered with an Anglican view of the innate rigidity of society, assured me that through self-improvement I could succeed in the world. So far, this had seemed to work.

The City of Birmingham itself, with its blackened municipal buildings and a million industrious inhabitants proclaimed the same message. By sheer hard work, the city had built palaces of industry and government. It had drawn fresh water and piped it from Wales. It provided electricity, gas, trams and buses to serve its people. It built schools, hospitals, parks and swimming baths. Jerusalem was indeed builded here; and also Bournville which promised a better place for working people by a benevolent employer.

It would be several years before I realised that I was being taken for a ride by this Victorian propaganda. I blithely reckoned that I could do anything but I was firmly put in my place by the school careers master. With my interest in biology, anatomy and chemistry I thought that becoming a doctor might be a good idea. I thought I was clever enough to get into Cambridge University.

The careers master’s first question was: ‘What does your father do?’ I momentarily wondered what on earth that had to do with my choice but I told him the truth. ‘My father is a milkman’, was my reply. He told me to forget being a doctor. He suggested that I would only be accepted if my father was already a doctor; what he meant was ‘middle class’.

I rationalised it; I was not meant to be a doctor; no-one else among my extended family and friends was a doctor. It would be a very long course, over several years; how could I support myself if my family could not afford it? This was one of the ‘what if?’ moments in my life. What if I had challenged his view? What if I had tried for Cambridge entrance? What if, in about 1974, I had graduated as Dr Derek Perry?

Instead, I applied for a degree course in pharmacy. A second-class doctor, so to speak, but achievable by someone who was not destined to qualify as a doctor. A pharmacist was just a clever shopkeeper selling something that required specialist knowledge. At least I might end up running a shop instead of sweeping its floors.

When I finally got to Chelsea College of Science and Technology I was surrounded by people who were more middle class than those I knew in Birmingham. My student colleagues were the sons and daughters of doctors, lawyers, and a fair number of pharmacists. One, I recall, had his own red sports car. I never made friends with any of them; I was already an outsider.

I dropped my West Midlands accent quite quickly. Not because I was ashamed of it but people would ask me if I was from Liverpool and did I know the Beatles? I wanted to fit in and tried to speak with a bland London accent. I noticed the geographical divisions between richer and poorer. My daily journey home from the college to my digs would take me from Chelsea and South Kensington, with its white stuccoed mansions in tree-lined and very expensive squares, to Acton where I lived in a shared room in a terraced house around the corner from a razor blade factory.

I remained class unconscious while I lived in London, despite the extremes I saw every day. I now knew that there were places I could never fit in and people I could never relate to. I was an outsider, a fact confirmed when I began to read Camus, Dostoievsky and Sartre. It was a start but it would be a long time before I achieved class consciousness. 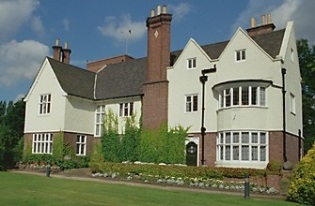 [2] Left: Garth House, Edgbaston was built in 1901 by architect William Bidlake as his own residence. It was a large ‘arts and crafts’ mansion which tried to look like a cottage. I would occasionally deliver their butcher’s order. Right: Dawlish Road, Selly Oak, where my parents rented a house when they first married in 1940. Only a mile or so apart on the map but miles apart socially. 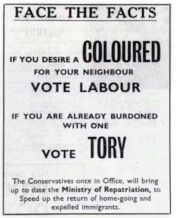 [3] Except in Smethwick in 1964. This was a poster put up in the constituency during the 1964 election. The candidate, Peter Griffiths, was both a Tory and a racist. Malcolm X visited in 1965 in solidarity with the people. Smethwick is quite close to Selly Oak by bus.

[5] Samuel Smiles (1812 – 1904). The origins of his most famous book Self Help are in a speech from 1845: ‘I would not have any one here think that, because I have mentioned individuals who have raised themselves by self-education from poverty to social eminence, and even wealth, these are the chief marks to be aimed at. That would be a great fallacy.’  … ‘Every human being has a great mission to perform, noble faculties to cultivate, a vast destiny to accomplish. He should have the means of education, and of exerting freely all the powers of his godlike nature’.

A model bus from Birmingham in the 1950s

Are you nostalgic for those yellow and blue Birmingham buses? I would go down to Stirchley where I would get the 41 or 45 to town, or the 27, a single decker, to Kings Heath where I went to school. The 2B crossed at Raddlebarn Road but never went anywhere that I wanted to go. I loved them so much that when I grew up I made a few! These models are diecast metal, finely detailed collectors’ models (not toys) scale 1:76 approx 10cms long. Price about £25. On sale with other models at www.my-collection.co.uk.