University students in the 1960s 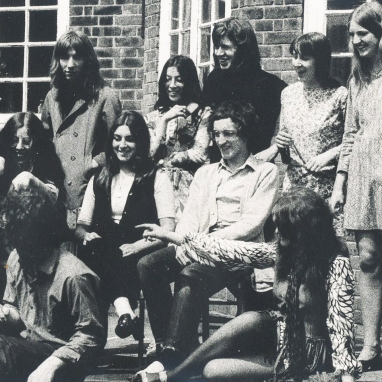 By the end of the decade, more women, long hair, no ties, still middle class but more radical politics.

Going to university as a student in the 1960s was a completely different experience compared to fifty years later. The children of working class[1] families never went to university; virtually all university students were middle class[2]. A university education was an indicator of your middle class status. I recall discussing higher education with a fellow student who was cock-a-hoop because we were now part of the ‘top two percent’[3]. I could not really relate to that, coming as I did from the bottom 2%.

The Robbins Report, produced by Parliament in 1963 described Britain’s universities as small in number and in size, élitist and predominantly male. Oxford, Cambridge and the four ancient Scottish universities were the heart of the system, acting as a finishing school for public schools and the foundation stone for the country’s political, financial and social leadership.

There were 18 other universities including the great civic institutions of the main cities: London, Durham, Newcastle, the colleges of the University of Wales, Birmingham, Manchester, Leeds, Liverpool, Sheffield, Bristol, Dundee, Exeter, Hull, Leicester, Nottingham, Reading, Queen’s Belfast and Southampton. Their role was to educate the sons, especially of the middle classes, for their destiny in the professions and industry.

There were 118,400 university students in 1963. Robbins said that undergraduate places should be available ‘to all who were qualified for them by ability and attainment’. In 1962, tuition fees were paid by the government and generous grants awarded for living expenses.

In 1965, plans were laid to open more Polytechnics, degree-level institutions with a technical basis. Over the next few years over 30 were opened across the UK, each awarding degrees through the Council for National Academic Awards, or CNAA.

In 1966, ten colleges of advanced technology, originally founded in 1956, became universities: Aston, Loughborough, City University London, Surrey, Brunel, Bath, Cardiff (initially part of the University of Wales), Salford and Bradford. Plus, the university I would attend in 1967, Chelsea College of Science and Technology. In 1967, full-time student numbers reached 197,000 which included myself.

In 1963 the Robbins Report talked about making sure that those ‘with ability’ were able to attend university; I presume that included the likes of me. Robbins showed that only 3% of the children of ‘skilled, semi-skilled and unskilled manual workers’ would go on to full-time higher education, compared with over 50% of the children of ‘professional and managerial’ or other white-collar occupations.

In 1967, just over three working class children in 100 would go to university. Nearly 97% of working class children had no opportunity to go for higher education. Boys had a better chance; only one girl in 100 would go to university. Once they got there, they would find that if they were in a university intake of 100 students, they would be lucky if two or three other students were from their social class. Universities were middle class institutions (except Oxbridge which had higher aspirations). Working class students, who did not share any of their ideals, would be lost, seen as quaint or odd, or simply ignored.